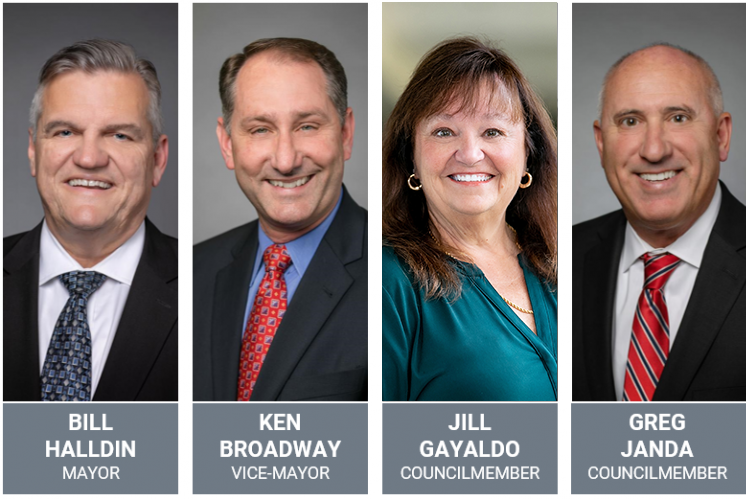 The City of Rocklin City Council consists of five members elected at-large alternately at the general election in November of even-numbered years to serve a four-year term. Councilmembers do not have term limits. The Mayor and Vice Mayor are elected by the City Council each November, usually for a one-year term.

The Council encourages expression of views and opinions by citizens on any matter of community interest that is within the Council’s authority. Comments during public hearings, written and oral communications are all appropriate methods of expressing views.

Presently, the City Council holds regular meetings on the second and fourth Tuesday of each month at City Hall – Council Chambers, 3970 Rocklin Rd., Rocklin., at 6:00 p.m. Due to holidays, meetings will not be held the first Tuesday in July, second Tuesday in November and December.

The City Council appoints five-members to the following: Board of Appeals, Community Recognition Commission, Parks, Recreation & Arts Commission, Planning Commission, and a three-member (with one alternative) Investment Advisory Committee.

Ethical standards shall be included in the regular orientation for newly elected officials and appointed officials, board members and commissioners, as well as for all City employees.

*Councilmembers do not have term limits.

Visit the Electronic Records Center for an archive of older agendas and agenda packets.

To view statements for current elected officials, as well as 2022 Councilmember candidates, see the link below to use our new eRetrieval system.

To preserve the privacy of persons who participate in the political process by making contributions to candidates for elective office, addresses from the below Campaign Disclosure Statements have been redacted for the internet version. Unredacted copies are available in the Rocklin City Clerk’s office for review and/or copies can be provided at 10 cents per page.

In some cases, Statements of Economic Interests posted below have addresses redacted.  Copies may be obtained by visiting either:

*Statements of Economic Interests for some state and local government agency elected officers may be available in an electronic format on the Commission’s Internet website at FPPC.