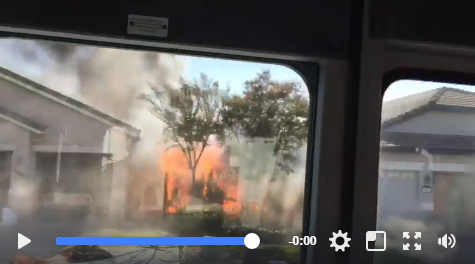 The Rocklin Fire Department responded to a fire on Sunday, Oct. 1 to find flames engulfing sheds and garbage cans on either side of a common fence between two homes. When the first engines arrived, the fire filled the space between the homes with flames contacting the walls and roof of each.

Aggressive, professional action from Rocklin Fire, with assistance from the Lincoln Fire Department, Roseville Fire Department and Cal Fire, kept the fire from causing major damage to either home.

“The teams did a great job in extinguishing the fire and minimizing what could have been heavy losses for the homeowners,” Battalion Chief Richard Holmes said. “We’re optimistic that everyone should be back in their residences very soon.”

American Medical Response (AMR) treated and transported one occupant to the UC Davis Burn Center with minor burns and no firefighters were injured in their work.

The cause of the fire is under investigation, with full interviews of occupants of each residence to be completed.

For more information about the incident or the Rocklin Fire Department, please contact Battalion Chief Holmes at (916) 625-5304 or Richard.Holmes@rocklin.ca.us.

A video of Rocklin Fire arriving on scene can be viewed on Facebook here.