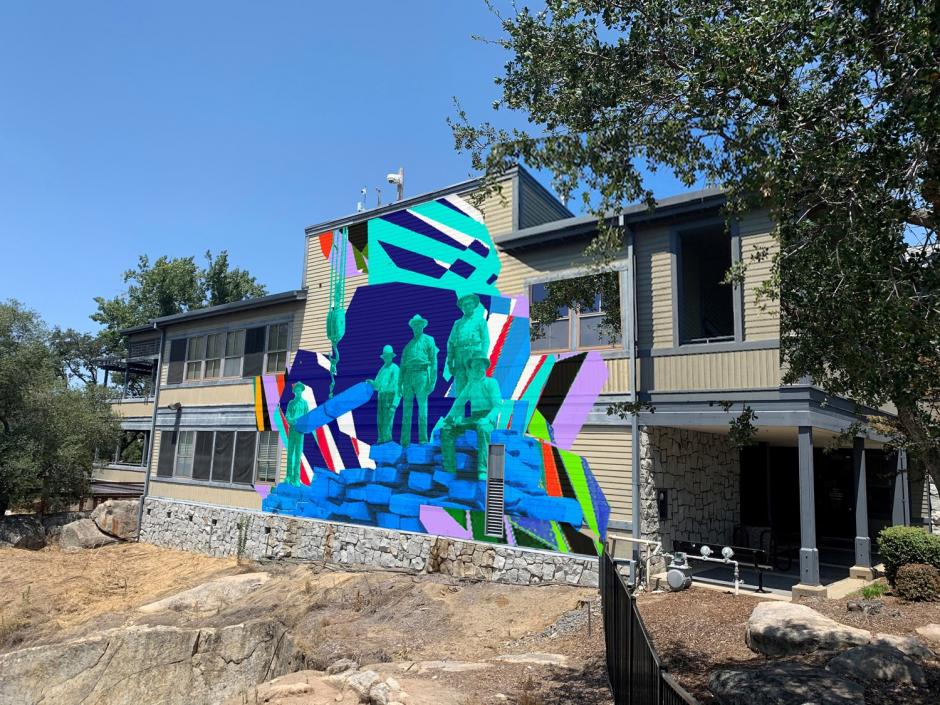 The walls outside of city hall overlooking Quarry Park Adventures will receive a makeover this fall in the form of a 30-foot tall mural. The artwork will honor Rocklin’s quarrying past, with a modern twist of color to add dimension and draw the eye to the realistic depiction of quarry workers from the late 1800s.

The Rocklin Art Task Force, in partnership with the Parks, Recreation and Arts Commission, began working with Wide Open Walls in June of 2019 to design a concept for the Project, which was planned as part of the renovations taking place at city hall. The efforts involved multiple public meetings, and resulted in a final concepts presented to the task force and commission during a joint meeting on Aug. 12, 2020. Artist John Horton’s design was unanimously approved and presented to City Council on Sept. 8, where it was approved 4-1.

“We’ve blended the past with the future. The colors draw your eyes and the workers pull your thoughts to Rocklin’s history,” said Susanne Stockton, Chair of the Parks, Recreation and Arts Commission. “When this is painted on the wall, the art will pop and provide that ‘wow’ factor.”

The design, fabrication and installation of the artwork will cost $12,500, with at least 60% provided to the painting artist. Payments will be made in phases, with the first due following the City’s formal acceptance of a design and issuance of a notice to proceed.

The non-profit Rocklin Community Theater has called Finn Hall its home since 2012 and will continue to do so through 2026 under key terms of agreement with the City of Rocklin, which was agreed to Sept. 8.

Over the years, RCT has provided many enjoyable programs, plays and enrichment activities for the youth and adult members of our community. In addition, the events held at Finn Hall draw visitors from the surrounding region to the Rocklin Quarry District, thereby benefiting Rocklin businesses.

The key terms call for Rocklin Community Theatre to continue to pay for ongoing expenses such as utilities, regular janitorial cleaning and maintenance of interior walls ceilings and floors. Additionally, RCT has agreed to pay for the expense of biennial wood floor refinishing and pest control services that were not included in the previous agreement.

With the approval of the terms by City Council, staff will now prepare a formal lease agreement to be presented to Council for consideration prior to the end of 2020.

Butler will assume his additional responsibilities on September 19 and serve in both capacities for up to six months, or until the City Council appoints a new city manager, whichever occurs first.

“I’m honored the City Council has entrusted me to serve as interim city manager and values what we’ve been able to accomplish at the police department over the last few years,” Butler said. “I’ll lean on staff throughout the City to assist me in the coming months to continue to provide exemplary service to the community and seamlessly build a bridge to the next city manager.”