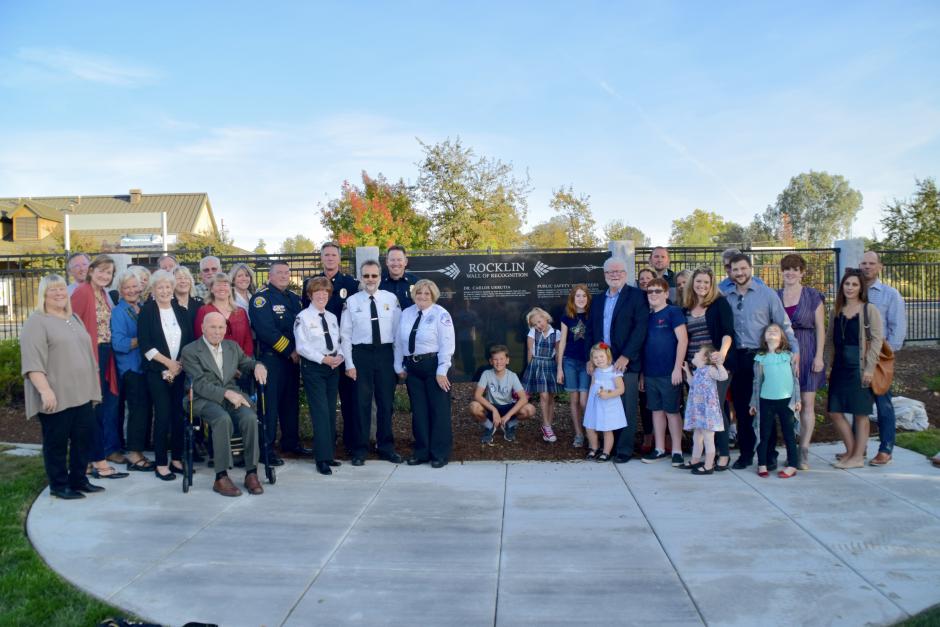 Roy Ruhkala, the patriarch of the Rocklin Ruhkalas at over 90 years old, was front and center with multiple generations of his family at the unveiling of the Rocklin Wall of Recognition on Nov. 1 at Peter Hill Heritage Park. The Ruhkalas were joined by two other groups of honorees whose accomplishments were etched on the wall, including representatives of the Rocklin Public Safety Volunteers and former long-time Rocklin City Manager Dr. Carlos Urrutia and his family.

The Rocklin Wall of Recognition was originally a concept of Councilmember Scott Yuill, and become a reality with the support of the entire City Council, the Rocklin Community Recognition Commission, staff and residents. The wall was created to recognize and permanently commemorate persons, families, business entities, and community groups making significant contributions to the City. These contributions, in a variety of ways, help shape the character, history, culture, and identity of Rocklin.

Before the wall was unveiled outdoors, the pews of Historic St. Mary’s Chapel were filled to capacity and standing attendees lined the edges of the Rocklin landmark to take part in the wall dedication ceremony.

Rocklin Mayor Ken Broadway, Vice-Mayor Joe Patterson, and Councilmembers Jill Gayaldo and Yuill provided summaries of the Honorees’ contributions, including the wall inscriptions below, before introducing the representatives.

The three initial Wall of Recognition honorees, whose names are etched in stone, will be joined by future deserving candidates chosen by City Council at the rate of one addition per year. A nomination form for residents to suggest candidates will be available year-round on the Rocklin website beginning in January 2019.