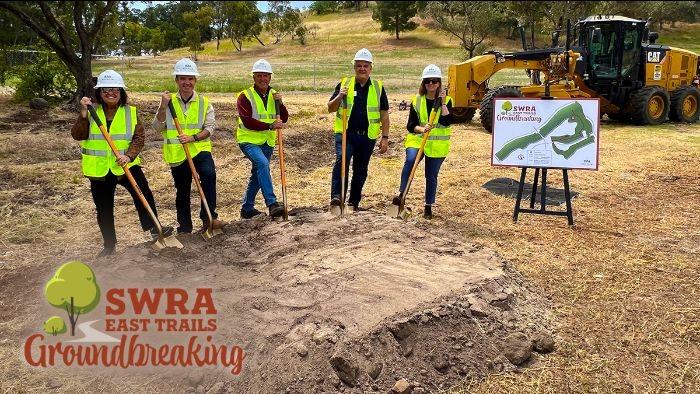 On Thursday, May 11, 2022, Rocklin City leaders and partners celebrated the ceremonial groundbreaking of the East Trails at the Sunset Whitney Recreation Area. The new trails, when completed later this year, will provide an additional 2.2 miles of paved paths for people to enjoy, nearly doubling the length of those now available to residents in the park.

The citizens of Rocklin highly value recreational space, with the quality of parks being one of the top reasons people list in surveys on why they love living here. Additional walking and biking paths were also the leading amenity people were interested in seeing more of in the SWRA.

The City Council had clear vision in 2017 when approving the purchase of the SWRA. They wanted to create 184 acres of a green space at the heart of the city, providing an oasis for recreation, relaxation and outdoor activities for all that could become Rocklin’s version of Central Park in New York.

The East Trails will be just another step in seeing this vision become a reality, and I can’t wait to see both sections open in the later portion of 2022.