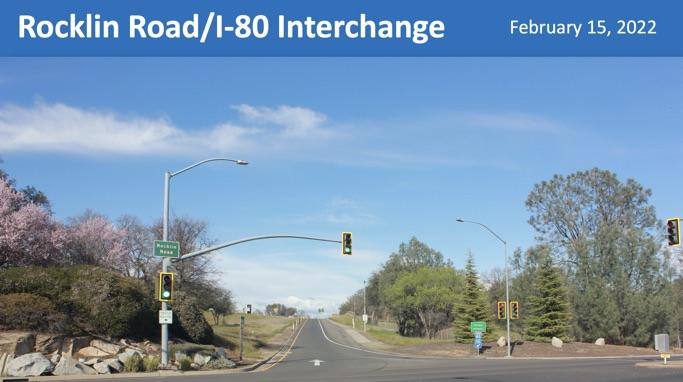 On Tuesday, February 15th, 2022 from 10:00 – 11:30 a.m., the City of Rocklin held their second Stakeholder Meeting for the Rocklin Road/I-80 Interchange Improvement Project. Below is a list of project team members that were in attendance:

Participants from the following businesses also attended the meeting:

The objectives of the stakeholder meeting were to provide updated project information and discuss any possible concerns and opportunities for project improvements with key stakeholders.

The City of Rocklin is making long-term operational and circulation improvements within the area of Rocklin Road/Interstate-80 Interchange. The improvements will address existing traffic congestion and improve walking and biking connections between downtown Rocklin and Sierra Community College.

The meeting was conducted online via Zoom. First, Katie DeMaio with AIM Consulting welcomed attendees, presented the meeting agenda, and then introduced the project team and allowed some time for the stakeholders to introduce themselves. Next, Matt McClure, Public Services Manager and Project Manager with the City of Rocklin, provided welcoming remarks and brief project history.

After, Luke McNeel-Caird, Senior Project Manager with Jacobs, started the presentation on the project including a review of the project goals, discussion on refined project alternatives, and schedules. Then, the meeting was handed over to Dave Stanek with Fehr & Peers to go over the Transportation Study Area and further discuss traffic modeling by showing a traffic simulation video of the existing conditions of Rocklin Road. Following, Mike Robinson with Jacobs presented the preliminary roadway design, going into the specifics of the geometric approval drawings. Finally, Ashely Kellogg with Jacobs, reviewed the work that the project team has done on the Environmental Document, presented the Environmental Technical studies, and reviewed the Project Schedule.


Discussion within the Meeting

Participants were encouraged to unmute themselves and ask questions at any point during the meeting. Below are summaries of some of the slides that prompted questions and comments that were expressed. The discussion portion of the meeting began with a presentation of a specific concept proposal followed by a group discussion raising questions and concerns.

McNeel-Caird began by reintroducing a Diverging Diamond Interchange (DDI). He explained how eliminating the westbound left turn for I-80 against oncoming traffic and limiting the number of traffic signal phases allows free-flowing turns when entering and exiting an interstate thus reducing traffic. An informational video was then played that showed an example of how a DDI works. Sonia Johl then asked, “Does this mean that the traffic light will be eliminated to make the traffic flow more efficient?”. Mike Robinson explained, “We are not eliminating any traffic signals. The main difference is the movements onto the freeway – we are just making free movements that are not inhibited by signals anymore.” 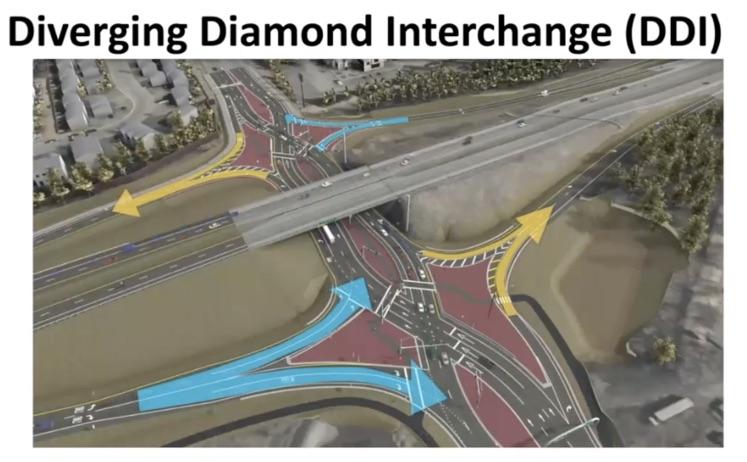 McNeel-Caird explained to the attendees that existing streetlight data had been gathered to see where people in Rocklin were driving to and from. The data showed that more than 5,000 trips a day are traveling less than a mile, which McNeel-Caird proposed that those people could be convinced to bike or walk as an alternative. After presenting the data, Johl asked, “Are there any numbers that represented travelers who were just in and out and stopping to get gas or food from the easy freeway access?”. McNeel-Caird responded, “Those people are captured in the grand total of data, but we need to dissect the data better to find out exactly who is not a local and who is driving a mile from their house. We need to drill into those numbers more and we will have better information for our community meeting in April.”

Afterward, information specific to Sierra Community College was shown. Johl added that “Sierra Community College is a commuter school, and we should take that fact into consideration with these numbers.” Next, McNeel-Caird explained that “18,000 trips to the college campus are made and about 500 of those trips are traveled from less than a mile away. So, even if the number of people that travel less than a mile is 100 or 200, those people would still benefit from having the option to walk or bike to campus.” After that, there were no more questions and the presentation continued.

Alternative 1 was presented to the attendees along with a design for the Pedestrian/Bike Overcrossing. Alternative 1 raised a few questions and concerns from Johl, including her fear of the overcrossing negatively affecting her business. She communicated that she would like for Sierra Community College students to still be able to walk to her store. The team reassured her that the sidewalk that led to her store would not be eliminated. 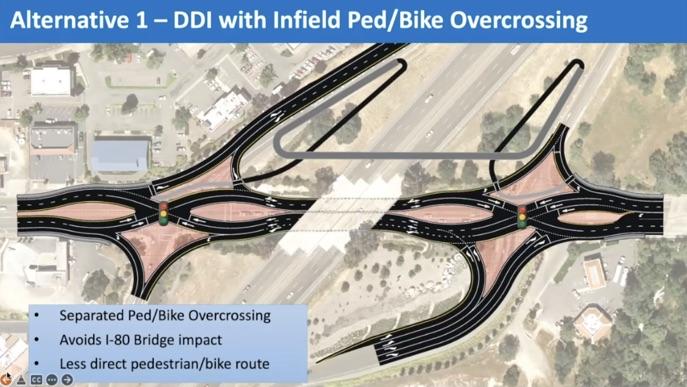 The presentation moved on to Alternative 2 addressing Gurmeet Grewal’s concern, which questioned “Why can’t we put the sidewalks on both sides of the interchange? Maybe we can move the overcrossing to the other side.”

McNeel-Caird answered by saying that “We have more traffic going westbound on I-80 to Roseville and Sacramento. By moving the sidewalk to the northside of Rocklin Road, we reduce the amount of traffic and bike/pedestrian conflicts. Alternative 2 is a more direct path for bicyclists and pedestrians to share the roadway compared to Alternative 1.”

With Alternative 2, Johl asked if there will still be a left turn lane that can access her business, in which the team confirmed that the lane would stay. 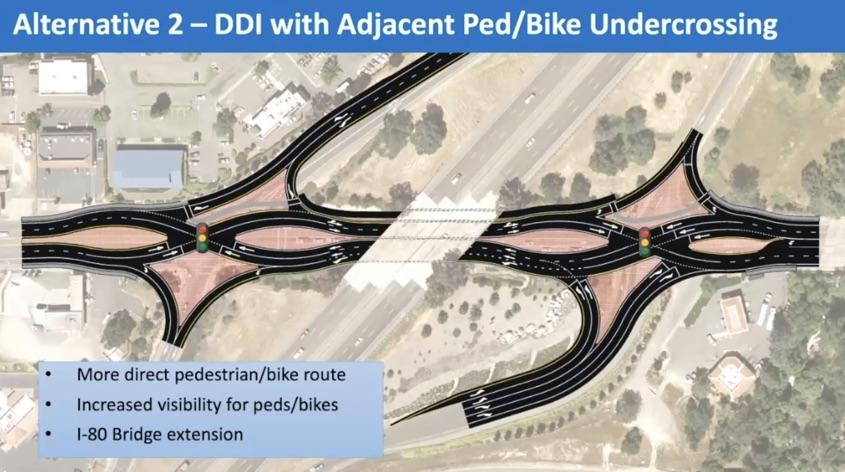 After the general presentation, Ashely Kellogg presented the project schedule and went over key dates. 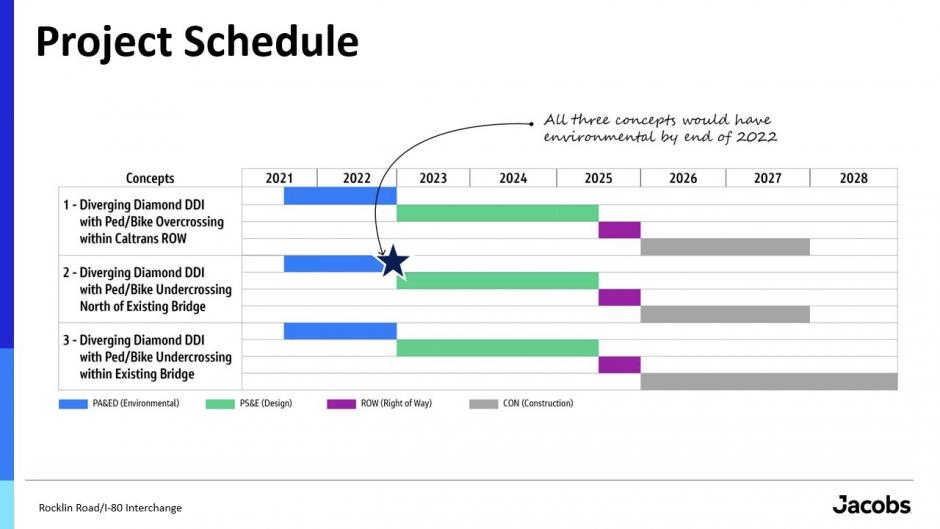 After the scheduled presentation, an opportunity was given for any lingering questions to be asked. Roger McDonald mentioned that he wanted to make sure that the Costco opening up on Sierra College Boulevard would be taken into consideration with the traffic study because he believes it will change the traffic load coming from the opposite direction. He also wanted to mention that “The businesses along Sierra College are moving down towards Sierra Community College with the idea that the business owners want people to bypass Rocklin Road, go down Sierra College Boulevard, then loop around and come in that way.”

Chris Ladeas, Caltrans Project Manager, wanted to emphasize his optimism for the project and that they hope to get to a good conclusion.

McNeel-Caird took a moment to ask the attendees if they had a preferred design for the overcrossing. McDonald replied that he liked the second design, Saini stated that he needed more time to look them over and Johl did not give an answer.