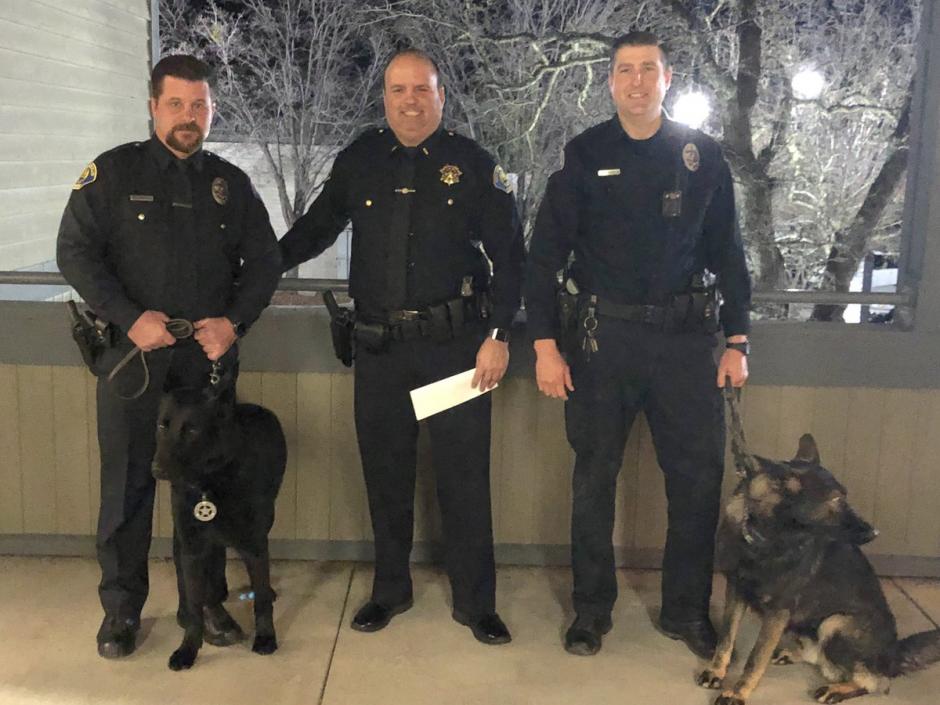 The Rocklin City Council received a special visit from two of the three Rocklin Police Department K-9 teams at their meeting on January 22. Officer Jeremy Black and Officer Tim Sartain stopped by with their K-9 partners, Condor and Bronco respectively, and each shared how they serve the community and fight crime in Rocklin with patrol operations and illegal drug detection.

After the dogs made their way back to patrol, the Council approved a resolution to accept the City’s Comprehensive Annual Financial Report (CAFR); introduced an ordinance related to building code standards; and discussed potential action items related to residential vehicle parking, an ad-hoc traffic safety committee, and vegetation and open space management.

Rocklin requires an annual audit of all City financial transactions by an independent auditor and the submission of the report to City Council. The audit is also used to satisfy state GANN reporting requirements. The independent auditor found no weaknesses or deficiencies in the City’s financial statements for Fiscal Year 2017/2018.

City revenues increased overall, with the two largest sources, property tax and sales tax, increasing by 7.2 percent and 9.2 percent, respectively, when compared to the previous fiscal year. The City’s financial position is stable due to conservative fiscal management but staff continues to work to address rapidly rising pension and retiree costs.

The Council considered a staff report with options to address instances of excessive residential vehicle parking on private driveways. The options included requiring permits for driveway construction which would allow City review of plans; limiting the size of driveways in front yards; and/or limiting the number of vehicles that could be parked on a single family residential lot. These options and other ideas were discussed but no decisions were made on the item.

Mayor Joe Patterson expressed his desire for the City to appoint a group of citizens to a limited-term ad-hoc committee. This group would make recommendations to the Council to improve general traffic safety in Rocklin. Discussions revolved around how this committee might coincide with the current City traffic committee, which meets quarterly to analyze traffic issues that occur across the City from a safety perspective, a legal prospective, and an engineering perspective.

Staff and the Mayor committed to bringing more information back to Council on possibilities for additional citizen involvement in the traffic planning process.

The Rocklin Fire Department is developing a comprehensive vegetation management and fire fuel reduction program that will update maintenance requirements of open space and developed parcels to reduce the risk of fire. The City will conduct a robust education campaign to inform landowners of the requirements for fire fuel reduction and defensible space, and phase in enforcement of the program over two years.

The City of Rocklin has a General Open Space Management Plan (GOSMP) that was adopted in 2015 to conserve and protect federal waters, existing wetland resources, riparian corridors and adjacent upland habitats within established open space in the City. The City’s management of the plan includes enforcement of encroachments into the open space by private property owners, which has been resisted by some owners.

Council reaffirmed that City staff continue to follow the GOSMP, enforce open space encroachments and to work with private property owners to have them removed.

Watch the entire Council meeting or choose the item your interested in reviewing here.