Where are they now? 2018 Wall of Recognition Honoree Carlos Urrutia 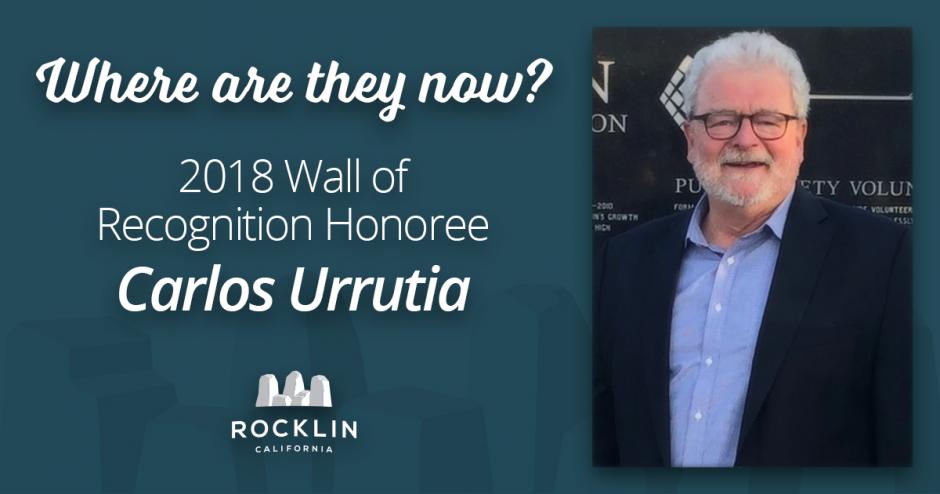 Describing it as a “great honor” and feeling community appreciation many years after his retirement as Rocklin city manager, Dr. Carlos Urrutia reflected back on being one of the first to have his name inscribed on the Wall of Recognition.

Dr. Urrutia served 26 years as Rocklin’s city manager and said his greatest accomplishments included establishing a sound fiscal policy during the city’s tremendous growth and leaving behind a significant monetary reserve. He praised the Rocklin community for its stability and acknowledged the city staff under his leadership that he described as “highly competent professionals.” Amazingly, only 12 individuals served on the city council during his tenure.

The Wall of Recognition states in part, “Dr. Urrutia’s acumen in public finance and urban planning guided Rocklin’s growth phase to a fiscally stable community with sound infrastructure and high levels of services.”

Today, when not performing consultative services for local government agencies, he and his wife enjoy spending time with their children and grandchildren, with most of them residing in the Sacramento area.

Help the City recognize those who have helped shape the character of Rocklin and submit your nomination for the 2021 Wall of Recognition honoree today.

Nominations are due by Sunday, August 8, and can be submitted online at https://www.rocklin.ca.us/wall-recognition.