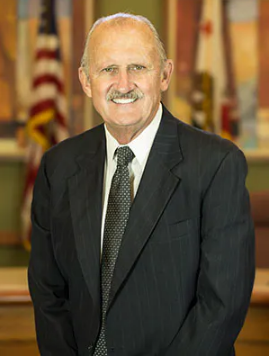 For the past 42 years, in one form or another, Jerry Mitchell has been involved in public service for the Rocklin community.  In 1981, Mitchell was informed by his employer that he would need to relocate from Sunnyvale to the Sacramento Region. So with his family in tow, the Mitchell’s began exploring for a home when they came across Rocklin, a suburban city of less than 8,000 residents. They bought a house and still reside in the same one today.

Mr. Mitchell’s interest in community issues was perked when he found out that the city only had two parks – “Old Timer’s Park” and “Johnson – Springview Park.”  Wanting to see park expansion, he started a group with the goal of building parks on undeveloped land left by home builders and then find a way to pay for them.  After much planning and organization, Mitchell and his group got city council approval to add six more community parks.

When an open seat came up for election on the city council in 1987, Mitchell “threw his hat in the ring” and was elected following service as a Parks and Recreation Commissioner. Reflecting back on his council term, he said what motivated him to run was his interest in park expansion.  What was his greatest accomplishment while serving as a council member and mayor? His answer to that is the continued expansion of parks and walking trails and the development of the early phases of Stanford Ranch.

Although he only served one four-year term on the council, Jerry Mitchell has continued to serve the people of Rocklin in many ways:  Redevelopment Advisory Committee, Rocklin Historical Society, the first chairperson of the Community Recognition Commission and as an elected public official serving as a Director of the South Placer Municipal Utility District Board.  He said he enjoys public service, loves Rocklin and has just looked for opportunities to serve when they have appeared.

His message to the community is when you find an unmet need – try to fill it! Be involved in supporting parks, picking up trash - find a way to be involved.  In 2012, Jerry Mitchell was the recipient of the Ruhkala Community Service Pioneer Award – an honor designated for an individual or organization that has demonstrated commitment to Rocklin for an extended period of time.  Mr. Mitchell said he was greatly appreciative of being recognized and having his many years of involvement acknowledged.  Jerry Mitchell is a pioneer and a great example of community spirit.