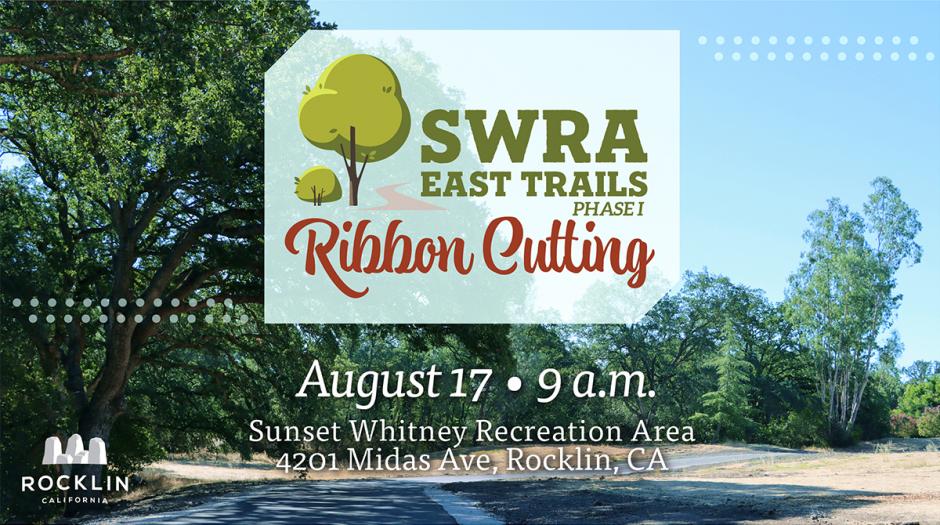 The City of Rocklin will officially open Phase 1 of the East Trails at the Sunset Whitney Recreation Area on Wednesday, August 17, at 9 a.m., adding approximately 1.1 miles of ADA-accessible pathways for people to enjoy.

Phase I of the East Trails offer viewing access to approximately 30 additional acres of the SWRA and will nearly double the length of general paths available to residents in the park after Phase II is complete.

Short remarks from Mayor Bill Halldin and Parks, Recreation and Arts Commission Chair Christine Anderson will be followed by a ribbon cutting near the access to the new trails at the SWRA Midas Ave. entrance.

“When the City Council purchased 184 acres of a green space at the heart of Rocklin in 2017 they envisioned an oasis for recreation, relaxation and outdoor activities,” said Mayor Halldin. “The opening of the first section of the East Trails will be another step in seeing this vision become a reality, and I look forward to all the SWRA trails being opened later this year.”

Phase I of the East Trails expansion was funded by $428,000 in state grants focused on recreation, with the City matching $44,500. The City has also committed surplus dollars from Fiscal Year 20-21 to rehabilitate the second and final section of the East Trails. A construction contract was approved this week to complete the project late this fall.

The citizens of Rocklin highly value recreational space, with the quality of parks being one of the top reasons people list in surveys on why they love living here. Additional walking and biking paths were also the leading amenity people were interested in seeing more of in the SWRA.