Influential Groups Honored At The 2022 Wall of Recognition Ceremony 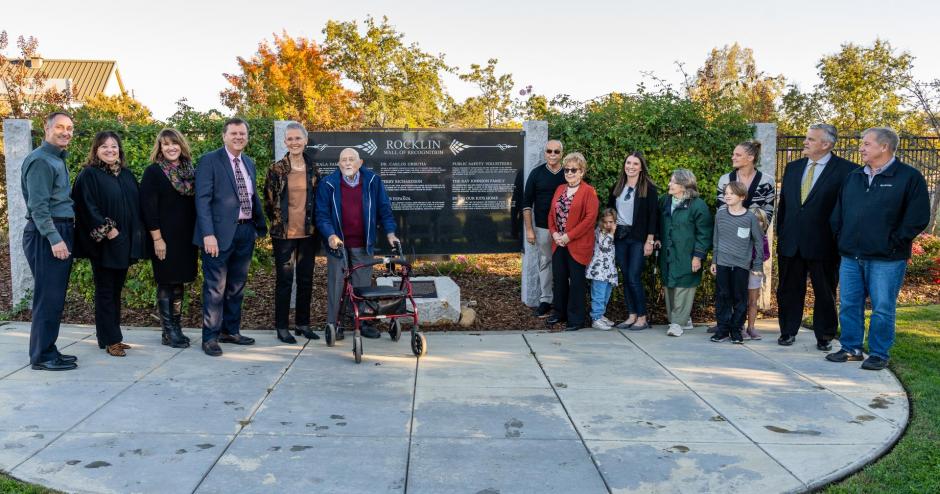 Last Thursday, the City of Rocklin honored the accomplishments of Club Español and “Bring Our Kids Home” with inscriptions on the Wall of Recognition for efforts that have shaped the diversity of Rocklin’s community and the quality of its educational institutions.

Club Español was a nonprofit cultural group that helped preserve the history of Spanish immigrants who arrived in Rocklin in the early 1900s and made numerous contributions to the City.  They produced and funded several research projects about Spanish history in the City and have made generous donations to several Rocklin organizations, including the Rocklin Historical Society.

Patricia Byrnes, a previous member of Club Español, represented the group during the ceremony.

“Club Español had a lot of first, second and third generation Americans that were really engrossed in the community as well as Spanish history,” she explained. “My mother, as an example, was born in Spain before she came here and helped to start the Rocklin Historical Society and participated in numerous volunteer efforts around the City. Having the Club’s name on the Wall of Recognition brings honor to the Spanish people that made their way into Rocklin.”

“Bring Our Kids Home” was the slogan of the proponents of Measure A, which was passed by voters in 1986, expanding the Rocklin Unified School District into a K-12 district. The effort led to the construction of Rocklin High School and allowed students to attend school in Rocklin, instead of neighboring jurisdictions.

Michelle Sutherland, Rocklin’s Community Recognition Commission Chairperson, explained why the proponents of “Bring Our Kids Home” were chosen to be included on the Wall of Recognition.

“With ‘Bring Our Kids Home’ we see what having Rocklin schools and a Unified School District has done for this City by allowing Rocklin students to have a local education and bringing new families in to the City. We felt that it was very important to honor the regular citizens that took all of that time and work to make it happen.”

Councilmember Jill Gayaldo was also present during the ceremony, sharing her thoughts on why the Wall is integral to promoting Rocklin history.

“Let’s recognize not just the people who did something great for the year but for those groups and individuals that came before to build the City’s groundwork. If you were a stranger and came to Rocklin, we want you to see a tapestry describing what made this City the way it is. That’s the intent behind this wall: you can walk up to it and learn about how we got to where we are.”