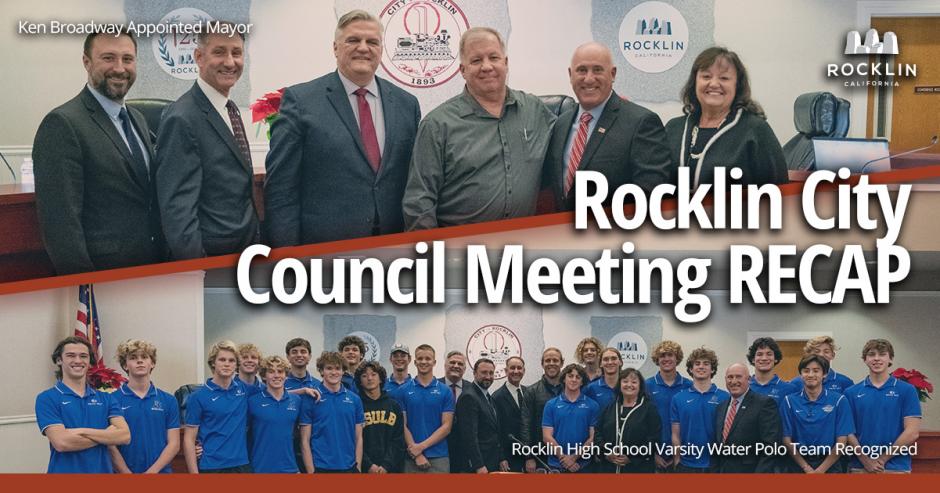 The Rocklin City Council on Dec. 13 unanimously appointed Vice-Mayor Ken Broadway as Mayor and Councilmember Greg Janda as Vice-Mayor for 2023.

“I’m honored to be trusted with the responsibility of helping lead Rocklin into a strong and prosperous future as Mayor in 2023,” Broadway said. “2022 Mayor Bill Halldin was a dedicated Mayor and will continue to be a valued member of the City Council. I look forward to working with him and the entire Council on behalf of the citizens of Rocklin.”

In addition to the appointment of the Mayor and Vice-Mayor, three Councilmembers were also sworn in. Councilmembers Gayaldo and Halldin were sworn in after winning the November election. Gayaldo and Halldin were both first elected to the City Council in 2018. David Bass was also sworn in to fill the vacated two-year seat left by then-Councilmember Joe Patterson’s resignation in June of 2022. Patterson was elected to the California Assembly in the November 8 2022 General Election.

City Council also honored Paul Ruhkala for his term as an Interim City Councilmember. Ruhkala is a lifelong Rocklin resident, and has served for many years on commissions and boards within Rocklin. He was appointed to fill the vacant two-year City Council seat until the November election and was appointed in August of 2022.

A special presentation was held to commend the Rocklin High School Varsity Water Polo Team on an outstanding season. They had a 2022-2023 season record of twenty-five wins and six losses and won the Sierra Foothill League Championship by going undefeated in eight matches.

“They represented Rocklin in central and northern California and exhibited the highest levels of sportsmanship and teamwork,” newly elected Mayor Broadway explained. “The coaches provided guidance to team members during practices and games that formed the ground-level for success as well. We commend the coaches and members of the team for representing the Rocklin community.”

The team members were presented with Rocklin pins honoring their successful season.