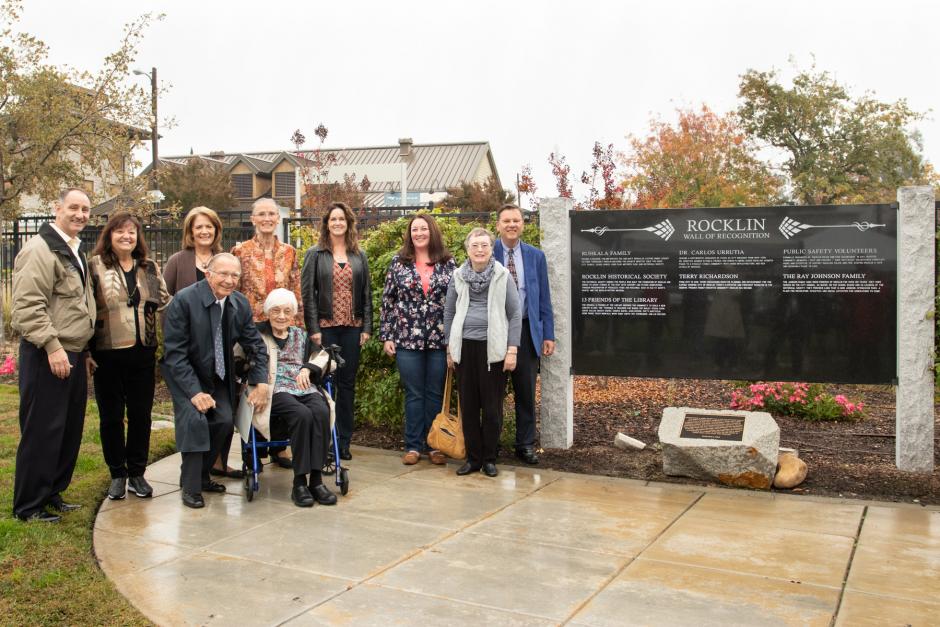 The City of Rocklin celebrated the accomplishments of the Ray Johnson Family and the Original 13 Friends of the Library at the Wall of Recognition engraving ceremony on November 1.

The Johnson Family have been pioneers of Rocklin for over 100 years, having served on the City Council, as mayor, on the school board and as leaders of the Historical Society. They provided land that is now Johnson-Sppringview Park, a place for recreation, athletics and social activities for generations to come.

“I am beyond pleased to have the original 13 who have done something so special for the community on the Wall,” said Mayor Jill Gayaldo, who opened the ceremony. “The Johnsons are a part of the very fabric of Rocklin, and everyone who goes to Johnson-Springview Park probably has no idea that we wouldn’t have that beautiful place if it weren’t for this wonderful family.”

Accepting the award on behalf of the Johnson Family was Gene Johnson.

“Our family name is etched in stone but nothing would have been accomplished without the support of the community,” Johnson said. “I have no siblings and Marge (his wife) and I, with no children, are the end of the Rocklin Ray Johnson family. I hope that the family’s legacy can live on and has been fulfilled by the inclusion on the Rocklin Wall of Recognition.”

One of the original 13 Friends, Louise Cullen, was also present for the ceremony to accept the award.

“The State of California came together with their county and community in supporting funds towards a new library, so we were very proud of that. We had a lot of good times with our city and county. The library was able to come into fruition and all the people whose names are on the wall in the first library hold very special memories.”