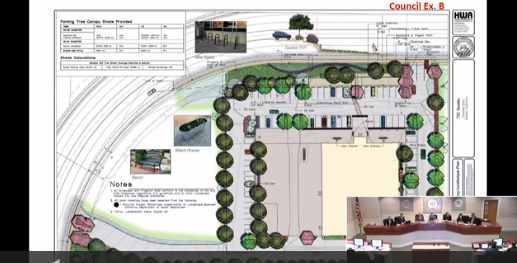 The project was appealed to City Council after the Planning Commission denied the Tractor Supply design review and oak tree permit on Nov. 6, requesting changes to reduce the number of healthy trees that would be removed. An additional six oak trees will now be preserved in comparison to the original proposal considered by the Planning Commission, which did approve the mitigated negative declaration, the conditional use permit, and the tentative parcel map for the project in November.

A total of 84 healthy trees, including 33 Holly and Valley oaks, will be planted as part of the project’s permanent landscaping to replace 42 trees identified as being in “fair to good condition” which are being removed. The 42 trees are also subject to mitigation under the City’s Oak Tree Preservation Ordinance. Each new tree will have been green-housed raised for at least two and a half years. An additional 21 trees that are dead, dying or in poor condition will also be removed.

“I appreciate that the Planning Commission taking a hard look at the oak tree preservation plans for this project,” said Mayor Joe Patterson. “Further, I appreciate the applicant responding to their concerns and working with the City to preserve Rocklin’s character while simultaneously creating an ideal retail environment for their business.”

Vice-Mayor Greg Janda echoed the praise for work done by the Planning Commission, City staff and the applicant to save additional trees. He also noted the consistency of the project with the City’s long term plans for the area.

“This is a well thought out project on a site that has been slated for commercial development for some time,” Janda said. “The project brings another unique shopping opportunity to Rocklin that will be a great addition not only for our residents but for those in the surrounding area.”

The City Council also approved resolutions authorizing the purchase of equipment needed for the construction of the planned Johnson Springview Water Park and accepted the completion of a roadway and parking project related to the adventure park and previously proposed New Fire Station 1.

Read the agenda and view a full video of the meeting here.