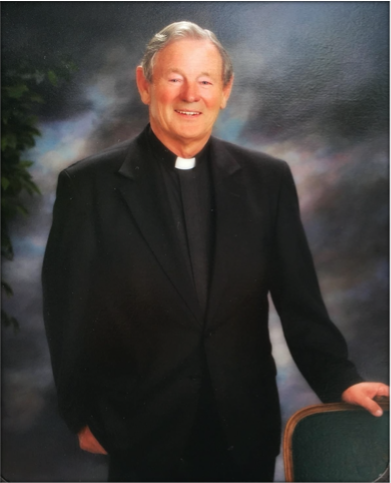 When Father Michael Dillon arrived in Rocklin on May 1, 1981, the first thing that struck him was the community – everyone seemed to know each other, was involved, and helped out.

“Since long before I came here, Rocklin has been very family oriented and full of friendly, helpful people who were very much in tune with one another,” said Dillon, reflecting back.

At that time, Rocklin had a population of only 7,000 and Dillon’s Saint Mary’s Church only supported about 500 people. To accommodate Rocklin’s rapid growth and community, Dillon formed what is now the SS. Peter & Paul Parish. While it was initially a struggle to find a location, the new parish soon began to grow, building after building, member and member, and everyone involved shared Dillon’s optimism and work ethic, welcoming both the challenges and rewards.

And it paid off, by the time of his retirement in 2009, SS. Peter & Paul Parish had 3,000 registered families. Under his leadership, a religious education center, library, classrooms, and youth center were established, along with over 50 ministries within the parish.

A few days away from exactly 40 years later, Dillon will be honored on April 27 at the City Council meeting with the Pioneer Ruhkala Community Service Award for his contributions to the Rocklin community.

Dillon’s work throughout his life is a great example of his own personal philosophy: encouraging others to give back through leading by example.

“The best way to pass on a value is to practice it oneself,” Dillon said. “Children learn from their leaders not by preaching or teaching, but by helping them be a part of it and giving them the opportunity to see the benefits of helping others first hand.”

In 2001, Dillon also had an endowment established in his name for students attending Catholic high schools and colleges, which has helped more than 200 students with $350,000 in scholarships awarded.

“Father Michael Dillon selflessly dedicated himself to serving Rocklin for 28 years before his retirement in 2009. We celebrate and honor him,” community member Ron Dolinsek said in his Ruhkala Award nomination.

Dillon said helping others gives a sense of wellbeing and fulfillment. He believes it is crucial to consider the less fortunate, rich, poor, young, and old alike. He said, “Ask anyone who volunteers and helps the needy, and they will tell you that there is an inherent reward.”